Welcome to the new Who Is...? site. After 7 years of rocking an old site using a pretty dated design with out-of-date software, I finally got to updating it. It has been a perennial theme on this blog of very long hiatuses and vain attempts to catch up.

When it comes down to it, blogs aren't as much a thing anymore, or at least in the sense of a "web log." The banner of "social media" has replaced that as the repository of all timely updates and cool things currently going on. With the democratization of the web & the proliferation of all kinds of publishing tools, there's more interesting stuff to read than ever. I still like long form blogs, but I feel that a massive sea of short form has drown out the long form stuff.

Anyway, here's to catching up!

Since last posting, I'm now out on the west coast in Seattle. It was a fun journey with only a few bumps along the way:

I arrived in Seattle at the beginning of July. Since then, it's been a slow immersion into culture of Seattle & the Pacific Northwest. Here's a summary recap of happened since then.

I settled into my home, a  7 x 3 ft space that contained my 3 bags and a futon to couch surf off of. Surprisingly, despite the thin padding for the heavy metal frame, I didn't wake up with back aches. On the plus side, I had a nice alarm clock: Peter's cat Ella who woke me nearly every morning by nuzzling my face. I enjoyed rooming with a long-time friend which was spent playing RocketLeague, chatting the politics and Internet culture, and interrupting a podcast. Hung out with a new friend Jessie, numerous times. I met a handful of new Louisvillian transplants to the PNW. I caught up with an old friend visiting Seattle.

I did some pair programming with Ella. 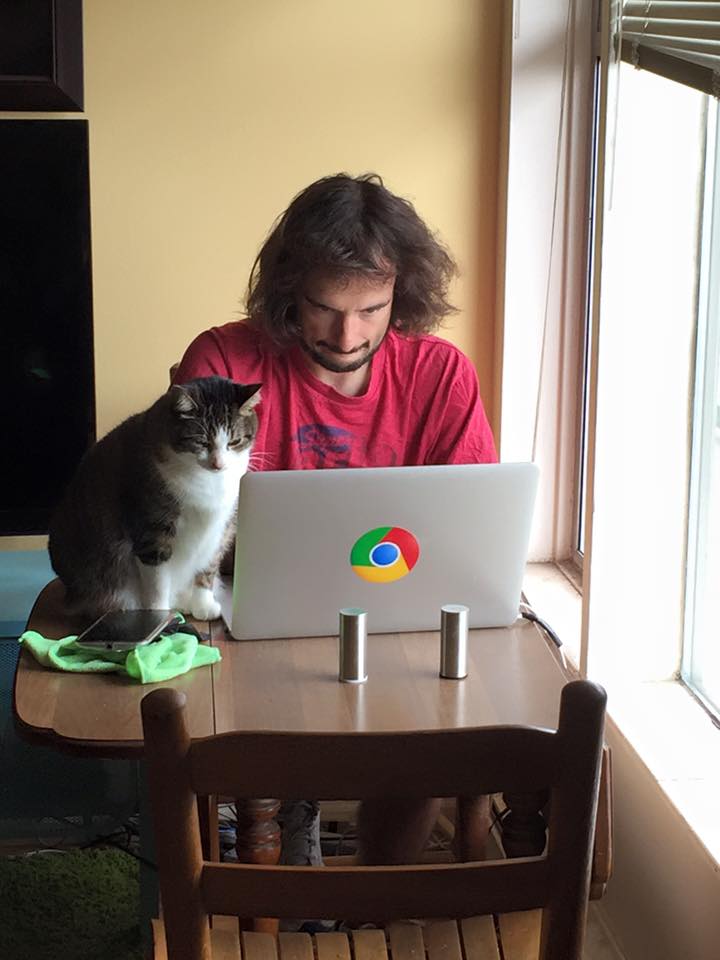 I started the hunt for looking for a 2 bedroom place while finding out how aggressive the real estate market is. I picked a fight with Time Warner's really shitty collection practices (and eventually won!). I launched my last new Drupal 7 sites. I estimated a website project bid for Ted Nugent. I put myself out there for a Drupal jobs and found 3 interviews lined-up back-to-back, only to be passed on the position I really wanted. Went on a few random Tinder dates only to be disappointed (and later with the dating scene in general).

Felt like could pose like a "local" since on the same day, in 2 separate locations, I was able to given directions to tourists using landmarks and no map. As time went on, I've found myself acquainted with the local/state Marijuana laws & regulations after being asked many times by tourists wanting to score pot. After reading through Thinking Fast & Slow, I was inspired by its anecdotes, and my choice paralysis, to come up with master ranking spreadsheet to decide on the best place to live, which my realtor called "like Moneyball." I put in a bid for a 2 bedroom place only to have it yanked from me, which, in retrospect, worked out pretty well. Later that month, I'd place a bid on another place which I one.

I felt like I gather pretty good knowledge of Seattle public transit. I attended the Pacific Northwest Drupal Summit. I closed on a condo. I lived in a barren condo with nothing but an air mattress, lawn chairs, & a TV tray for a month or so. I establish my web development / consulting business, Luciditi. I went to my very first Hump! film festival a with some new & old burner friends. I had my family visit before Thanksgiving. They helped move all my worldly possessions within 3 hours as I didn't plan for storage space parking in downtown Seattle. I spent Thanksgiving inebriating while conquering Towerfall on hardcore mode with friends (and celebrating by watching Beastmaster 2!).

I travelled back home for the holidays. I enjoyed the friends, family, and traditions. I had all kinds of mini-parties. I saw Episode VII. I attended the launch of Taco Steve's new shop. I kicked off NYE in Portland with a Strippers & Steak themed mini-burner party. I caught up with a good friend Will. I slabbed it up in Slabtown, Portland, OR. I closed down old business with clients back in Louisville. I'd picked up new business in the Bay Area.

I fought through a rougher PNW winter than I thought it was going to be. I met various neighbors. I completed the launch of the new Luciditi web server (half the cost, twice the speed). I shutdown the Riverhouse Wiki for editing.

...and so on...I'd go on, but this is just a rambling post. I have more deep, single-topic, posts that I'd like to get to so I'm just going to end this here. One of my goals for 2016 is to write more so expect more from this space in the future. With various web business out of the way, I should have more free time for this now.